skip to main | skip to sidebar

The mystery of the strange package, Part Two.

If you're not familiar with Nelson De La Nuez, and the strange package he received in September of 09, I suggest reading "The Mystery of the strange package" here:
http://dianajeann.blogspot.com/2009/12/mystery-of-strange-package.html

It appears that another mysterious package has found its way to Nelson's door step, sender unknown. As he tweets on Christmas Eve, that it was a Michael Jackson Opus.
Here are his exact words (I've put the tweets in order) 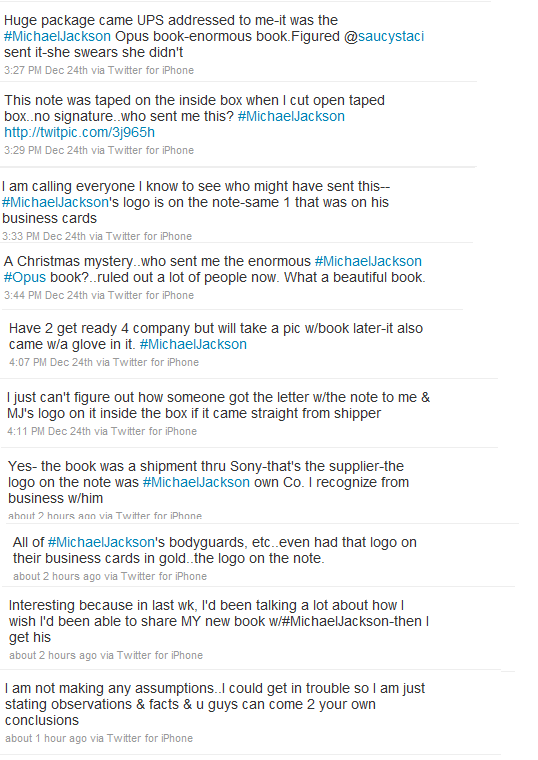 Who could have possibly sent Nelson such a wonderful Christmas Present? 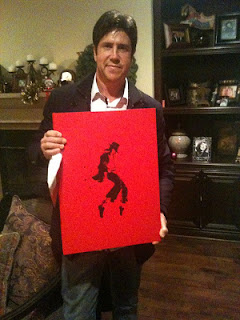 I want to wish everybody a very Merry Christmas, and a wonderful New Year. May 2011 bring all of you joy and happiness (and maybe even Michael Jackson :p ), and hopefully no pain or stress. I won't be able to post in the next two days on a count of the holidays. I'll be busy baking and spending time with my family, as should of all of you.

In the near future I do plan on posting recap posts on the past few months. I know most of it will be old news to most of you, but I would like to have it on my blog for future refrence. (and just incase some new comers happen to stop by)

I'm excited to get back into the Hoax Scene
Much Love to all of you.
-Diana
Posted by Diana Jean at 2:19 AM 1 comment:

It has been a while since I've last posted to this blog. For a while, it has been a major part of me and my life. As painful as June 25th, 2009 was for me, I really enjoyed the fun of investigating and all the people i've met due to the unforgettable day.

I have been kind of silent in the past few months, maybe nothing more than a forum login every now and then. It's not because I stopped "BeLIEving" or because I gave up or anything like that. It's because I've run into some personal matters that take priority in my life. Personal matters that can not be ignored.

Things are clearing up and looking better now, I would really enjoy getting back into blogging and investigating. Wether or not this will remain to be a "Hoax" blog will depend on time and circumstances. Wether or not Michael Jackson is alive is 100% unknown to me, What I do know is that something about the story is not right. So I will continue to investigate.

I don't think anybody even checks my blog anymore, but if there's a rare chance that you're reading this:
Thank You.

Have you watched the News today?
Maybe you saw a story that made you feel sad,
Or maybe one that made you feel happy.
Now, think about that story you saw.
I'll take a bet that it's never crossed your mind, that this story might be completely false.

Why is it that we always believe the word of other people?
If we haven't seen it first hand, we have no proof it actually happend...
So why are we so quick to believe everything we hear?
Maybe it's just Human Nature.

And maybe just maybe our gullibility it being taken advantage of.
Let me get to the point.

"Many news agencies lie and distort facts, not many have the guts to admit it...in court...positioning the First Amendment as their defense!

The attorneys for Fox, owned by media baron Rupert Murdoch, successfully argued the First Amendment gives broadcasters the right to lie or deliberately distort news reports on the public airwaves."

"On February 14, a Florida Appeals court ruled there is absolutely nothing illegal about lying, concealing or distorting information by a major press organization."


Baicly what it's saying is that, News stations first amendment right allows them the freedom to distort stories and facts.


You never know who else is misinforming you.
Posted by Diana Jean at 2:02 PM No comments:

Remember June 25th 2009, when TMZ was the first news outlet to confirm that Michael was "pronounced dead"?
Remember how they confirmed him dead just minuets before Michael was officialy confirmed "dead"?
Well, we have speculated that maybe they where just guessing and hoping to be right.
BUT according to Harvey, they wheren't just guessing...they knew.

During an interview with the Huffington Post, Harvey Levin gave this quote
""Well, before it was officially announced. We really knew this significantly before even what was going on, but this was, you know, crossing every t. We were positive when we put it up. We put it up when we were 100% positive."

According to Harvey, they knew significantly before 2:20pm (the time they posted the article) what was going on. Since Michael wasn't officialy pronounced dead until 2:26...What did TMZ know was going on?
Strange how they where 100% positive about something that hasn't happend yet, don't cha' think?
Posted by Diana Jean at 2:13 AM 7 comments:

Is the crew of American Idol helping Michael pull off the hoax?

Let’s go back to 2006, a year after Michael’s child molestation trial. He is an emotional mess and his reputation is severely damaged. Though Michael’s true fans know he would never hurt a child, thousands of people around the globe still believe he is a criminal. Michael wants his reputation back, he wants to be the King of Pop once again. But how?

Michael moves back to the United States, in late December (2006), after spending some time in Bahrain.
As stated Michael wants to get his reputation back. "Michael is determined to be a global phenomenon again.”

who does he go to?
Simon Fuller.

Why Simon Fuller?
Not only is he the Manager of many sucsessful artists, but he is also the producer and founder of the hit television series American Idol. Which in my opinion is the point of interest.

American Idol
Here’s where the connections come in. American idol has been the number one TV show for a long while. With millions of viewers, voters and talented contestants American Idol has allot of impact.

“American Idol: The Search for a Superstar on the Fox network, the show has since become one of the most popular in the history of American television. It is currently the #1 program in the Nielsen ratings and is one of only three that have been #1 for five consecutive seasons,”

Michael and the people who worked for American Idol

Bruce Gowers-  Directed 3 music videos for Michael including
-"Rock with you",
-"She's out of my life"
-"Can you feel it"

Dorian Holley-  Backing Vocalist for Bad World Tour
-Traveled with Michael for all of his subsequent world tours
-Served as a backing vocalist, as well as the vocal director for This Is It
-Married to trial attorney Shawn Chapman Holley, who once represented Jackson


If Michael wanted to work with American Idol, clearly he had the connections to do so.

We all know about the comicbook "Fated" that was sopposed to be released in June of 2010.
If you don't know about Fated, you can read about it here:
http://dianajeann.blogspot.com/2010/02/fated-to-be-published-this-june.html

On various websites you will find that the book is to be published through Random House Publishing, the same publishing company that published Michael's book "Moonwalk"

Rencently, Aliveofneverlan tweeted Gotham Chopra (who cowrote the book) and asked him when it was going to be comming out. Originaly it was supposed to be released in June of 2010, but this is what Gotham tweeted and retweeted back

So the release date has been delayed.

But that's not the strange part. The strange part is that, Aliceofneverlan sent Random House Publishing an email asking them about the book, and they told her that:

Diana Jean
Diana Jean here, giving you the strange facts since 6/25/09. I love investigating the death of Michael Jackson. Send me and email sometime DianaJean_Blog@yahoo.com-- you'll find me here: http://www.twitter.com/_hopee_